Wondering how to build your app? We compare mobile app development platforms for iOS, Android, web and more. Find out which platform is best for you.
Jan 15, 2020 • 8 minute read 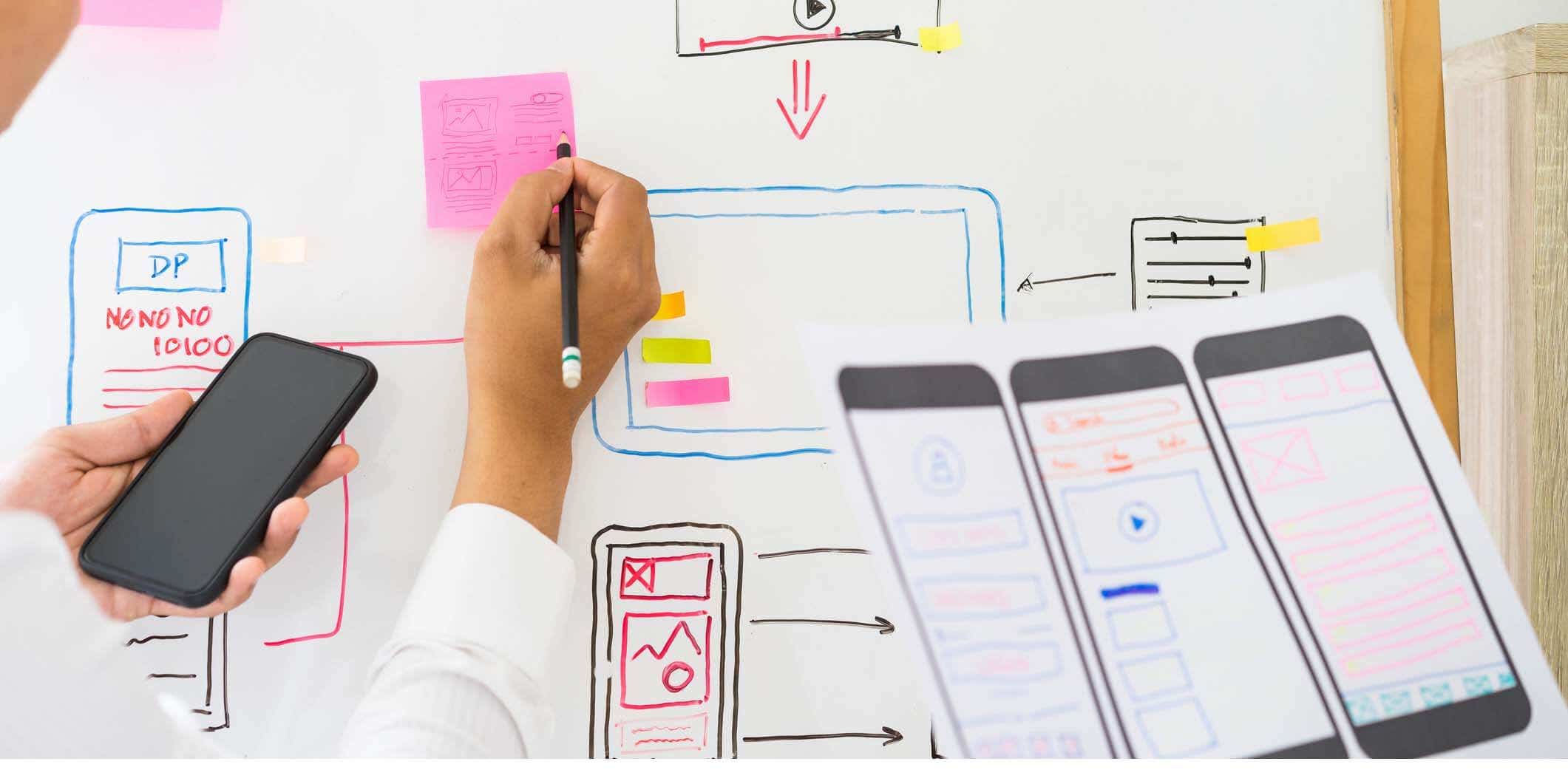 Mobile app development market is dominated by two operating systems, but developers can choose from a wide range of platforms

Apple's iOS platform was the first widespread smartphone operating system. It created the concept of the app store and set the tone for every mobile development trend that followed.

Apple's Swift programming language is fairly simple and straightforward. This means you can build an app using fewer lines of code. Apps for iOS used to be built in Objective-C, which made things easy for any developer well versed in C or C++. While Swift is simpler, if you're used to Objective-C you should be aware that it's not 100% compatible with Swift.

Apple sets an incredibly high bar for iOS apps. The App Store has strict requirements for performance, security and visual guidelines. A team of actual people reviews apps submitted to the store and gives them the thumbs up or thumbs down. The process usually takes about a day. Individual developers will pay $99 USD a year to have their app hosted on the store, while companies pay $299 USD.

Because iOS only runs on Apple's proprietary devices, it doesn't have the reach of a platform like Android. As of February 2019, iOS had 23.38% market share, while Android had 74.15%. However, iOS customers are incredibly loyal. Apple leads all mobile phone manufacturers with 92% brand retention.

Apple users tend to be quicker to update to new operating systems, making app updates relatively simple. While your app may need to support a few older iOS versions, most Apple users will quickly move to new iOS releases.

Google's Android shook up mobile app development by making its operating system open-source. This meant it could be used on any device, providing a much lower barrier to entry for consumers in the smartphone market.

Android development has gotten much simpler with the release of Flutter and the Dart programming language. Google also provides a host of open-source tools for developers, cutting down on the complexity involved in coding.

The difficulty in developing Android apps comes in the form of fragmentation. Because Android is open-source, it's used on a range of devices with different specifications and screen sizes. While there are a limited number of iPhones you'll need to develop for, there are thousands of different kinds of devices running Android. Moreover, Android users tend to be slow to update to newer releases of the operating system, meaning you'll have to make your app work with a number of different Android releases.

One major benefit of Android development is that it can be done on any machine, Mac or PC, while Apple's Xcode development platform only works on Macs.

The Google Play Store doesn't have the same stringent approval process as the Apple App Store. While Google provides guidelines for developers, it gives a bit more leeway for creative expression in an app's visual presentation.

Android definitely has the best audience reach of any mobile OS. Nearly 75% of smartphone users worldwide are on the Android system. Retention is a bit harder to measure, considering Android is device agnostic. But Samsung, one of the biggest brands to use the Android platform, has a healthy 77% brand retention.

Android developers have a trickier task when it comes to updates. Not only do they have to contend with a multitude of ever-changing device specifications, they also have to make sure their app works across a wide range of Android OS releases due to Android users' hesitance to update.

Web apps are delivered to users over the internet, without the need to download the app to their device. This means there's a low barrier to uptake, but it also means your app is dependent on the user's network connection.

Web apps give you free reign to use the codebase you're most familiar with. Whether it's HTML5, JavaScript, CSS or a number of other programming languages, you can use it to build your web app.

Approval isn't an issue with web apps, since they aren't hosted on app stores but rather delivered to users on their mobile web browser. Cost will be determined by the web hosting service you use.

Audience reach for web apps is entirely dependent on users finding your site. This means you'll need good SEO practices to push your site up the Google rankings and get in front of your audience.

The good news is that a Nielsen survey shows that, among major news outlets that have both a website and a native app, the audience is consistently larger for web. However, the same survey found that app users spend more time on the platform than mobile web users.

Again, updates aren't an issue for web apps. As long as your app is supported by the most popular web browsers such as Chrome, Safari and Firefox, the need to update should be rare.

A hybrid app is a web app that has been placed in a native app shell and can access features of the device's hardware. It uses the device's browser engine to access the internet, but can function independently of a network connection.

Like web apps, hybrid apps' strength lies in the fact that they can use web programming platforms like HTML5, CSS and JavaScript. They also work cross-platform, so don't require you to work in either Apple or Google's ecosystem.

Audience reach for hybrid apps is potentially enormous, considering they work cross-platform. This means you could have access to both the Apple App Store and the Google Play store audiences.

Retention for these apps will be device-specific. But developing an app that works on iOS and Android means you hedge your bets and get the benefit of both Apple customers' loyalty and Android's reach.

Updates for hybrid apps are easy because they're web apps living in a native shell. This means you can push cross-platform updates quickly and as often as you need to.

Progressive web apps (PWAs) are one of the hottest trends in mobile app development. They function and perform like native apps while offering the ease of cross-platform creation of a web app. They also work independently of the user's network connection.

Like web apps, PWAs can be written in common web development code like HTML5, JavaScript and CSS.

PWAs don't have to be hosted on an app store. They can be downloaded and installed on a user's device directly from the browser.

Like web apps, your audience reach with a PWA is limited only by your ability to get your app in front of users. One major benefit of PWAs is that they use a responsive design to fit any screen, from mobile to desktop. This means your users can have an app-like experience regardless of the device they use.

Apps for other platforms

Many mobile operating systems have come and gone, with many having raised a white flag and migrated to Android. However, a couple of stalwarts remain.

If you're familiar with developing Android apps, it's likely you'll feel right at home with Amazon Fire. Fire App Builder uses Android Studio and is Java-based. The platform also allows you to update values in XML and JSON rather than coding directly in Java.

The Amazon Fire store has its own set of content, performance, security and visual guidelines developers must meet. The approval process usually takes 2–3 days. Submission is free. You simply have to register for the Amazon Appstore Developer Portal.

The low price point of Amazon Fire tablets has seen the company leapfrog other manufacturers to be number two in tablet sales, just behind Apple and ahead of Samsung.

The venerable BlackBerry, once the darling of the mobile phone market, still has its niche amongst physical keyboard luddites. While the company has shifted towards a modified version of Android, it's still supporting and publishing apps for BlackBerry 10.

Writing apps for BlackBerry is easy, with the choice to build in their native environment, write in JavaScript or HTML or port an existing Android app. In addition to this, BlackBerry offers a number of development tools such as mapping functionality, mobile payments and push notifications.

BlackBerry has guidelines for app performance, security and content, but doesn't dictate the look and feel of apps as much as the Apple App Store. Approval can take a few weeks, but BlackBerry provides a way to contact their review team for status updates. It's free to submit your app.

If you're developing for BlackBerry, you're reaching a very specific and niche market. A 2017 Gartner study found BlackBerry had a little shy of 0.05% of the mobile OS market. That number is unlikely to have skyrocketed in the last couple of years. However, the small number of BlackBerry acolytes tend to be extremely loyal.

Considering BlackBerry has been operating on OS 10 since 2013, you won't need to make many major updates. Any changes to your app will require you to submit a change request ticket to BlackBerry, which will then go through a review process.

Your complete guide to hiring a programmer
You can hire a programmer to solve just about any complex problem, the problem is knowing how to hire the right professional for the job. Learn how..
13 MIN READ

Why hiring a graphic designer is vital for your business in 2020
Great graphic design will solidify your brand identity and drive revenue. Find out how to hire a great designer and what you should expect to pay.
9 MIN READ