Create A Video For A Crowdfunding Campaign (Kickstarter/Indiegogo) 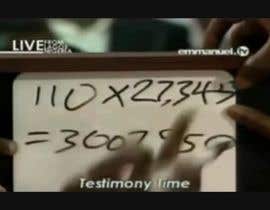 Please read and understand everything below before you start working on this contest.

Purpose of video is to raise money for a movie via crowdfunding. In the video you'll talk to the audience and pitch the idea to them. Act like the movie is yours and present yourself as the Executive Producer. Below is the film trailer. I have also attached photoz for you to use.

Title - Extortion
Genre - Comedy/Drama
Length - 80 to 90 minutes
Rating - PG 13
Number of Actors - 5
Writer, Director, & Producer - Amos Chinodakufa
Executive Producer - You (present yourself as the executive producer)
Amos Chinodakufa's Biography - Writer from the age of 12. With 5 published novels. (embed the attached photoz). Best student at English in school.
Story - Two young computer hackers, nerds, make a living off credit card fraud but complications arise when one of their victims tracks them down and pays them a visit. They plead with him to give them a few days to pay back the money but he gives them only one hour to do so.
Structure - Movie will be shot in real time like the movie "Unfriended", i.e. 80 minutes none stop.

IN YOUR VIDEO, YOU MUST DO THE FOLLOWING:

1. Be Likable & Friendly: Smile.
2. Keep It Short: Your video must not be more than 90 seconds long.
3. Use direct, simple, relaxed language. You’re not speaking to a boardroom of film execs.
4. Do Not Beg: Inspire the audience. Avoid asking directly for “help” or “donations,” instead ask them to contribute, to become a partner. Say things like “Together, we can make something spectacular.”
5. Have a great thumbnail image. It must be beautiful, mysterious and sexy. Look for example at the Thumbnail used at https://www.kickstarter.com/projects/1905175445/mazal-tov/description.
6. Have inspiring Background Music while you talk: No heavy metal or need for speed kind of music please. You can find free music at www.marmosetmusic.com.
7. Make sure your sound recording is perfect: Use a lapel/Lavalier microphone if possible.

GUIDELINES FOR YOUR VIDEO

1. Introduction: This is brief, just a few words. You introduce yourself and mention your title as the Executive Producer for the movie, “Extortion”.
2. Movie was written by your friend, Amos Chinodakufa, who will also direct & produce the movie. TALK ABOUT AMOS’ BIOGRAPHY as a writer. Then discuss briefly how people don’t read anymore, hence the move to film. Did you know that Your brain processes visuals approximately 60,000 times faster than text!
3. Talk about how you have a great script ready, great, not just good, and that this movie has a proper story and not some of the crap we’re seeing in Hollywood. It will also open the door for other bigger and better film projects. The big Hollywood studios like Disney & Paramount won’t give us money for our big budget ideas unless we can show them that we can actually make a movie.
4. Team: Describe your team. They should come across as capable and professional. Amos Chinodakufa is the main man. Media Navigation will handle Cinemetography & editing, Sound Academy will handle Sound. We’ll do Casting for proper quality actors.
5. Talk about the movie. It’ll be shot in Real-time like “Unfriended”. Tell the story of what the movie is about. Advise there’s more to the story but that you don't want to spoil it.
6. Talk about how we''ll use the money - Cinenmatography, Production design, hiring talent, music, and Print & advertizing, & securing a distribution deal with one of the major studios.
6. Present the Concept Trailer – Also apologize for the sound quality & mention you’re not using that Sound guy ever again.
6. Call to Action: After the Trailer, don’t let your crowdfunding video fizzle out. Capitalize on all the interest you’ve built up so far. Say something that encourages potential backers to act straight away. Try to make them feel like part of our team, an integral member who’s instrumental to its success.

Top entries from this contest

How to get started with contests